John takes us through a long sweep of history from before the creation of the world, through the incarnation and on to Jesus calling his first disciples before starting his public ministry.

And as you wish that others would do to you, do so to them.

Jesus mentioned this principle in the same breath with “Love your enemies, bless those who curse you, pray for those who abuse you,” and so on.  The evidence indicates he meant what he said.  This is extreme stuff.

It isn’t easy to love enemies.  No matter how hard we try, or what action we take, they can possess the uncanny ability to treat us badly somehow once again.  That is just how it is with enemies, right?

Yet, love in the truest sense needs to stay focused on others and their needs.  That’s why Jesus made this command a positive one – a “Thou shalt” rather than a “Thou shalt not.”  He didn’t want to give us an easy way out.

There is a story in the Talmud, in Shabbat 31a, that tells of a Gentile who came to a rabbi and said, “Convert me on condition that you teach me the entire Torah while I am standing on one foot.” That rabbi had no good answer.

The same Gentile came to the sage Hillel the Elder, who was grandfather of Gamaliel, the teacher of Paul the Apostle.  Hillel said, “That which is hateful to you do not do to another; that is the entire Torah, and the rest is its interpretation. Go study.” The man was converted.

It’s a great story and it is probably true, but with all due respect to the incomparable Hillel, we might say it is incomplete, based on this teaching of Jesus.  If we don’t do that which is hateful to people and stop there, we might possibly not do much at all – even nothing!  That’s the nature of the “Thou shalt not” in a command.  It is a prohibition rather than a positive task.

Surely Hillel, if he had more time than the Gentile balancing on one foot was willing to give him at that moment, would choose to elaborate.  Jesus was still young when the aged Hillel finally died and, perhaps while not under time constraints, may have even thought of his improved version of the golden rule based upon the rabbi’s words.

Again, he has us imagine what we might wish for ourselves in Luke 6:31.  And again our text,

And as you wish that others would do to you, do so to them.

Let’s leave that just as it is, without further elaboration.

Jesus begins to attract more attention, both positive and negative.  His family begin to think he is crazy.  Religious leaders accuse him of being under demonic influence.

Question:  Does the Bible teach that a girl can be forced to marry her rapist?

The question may seem to border on the bizarre, but it is not irrelevant.  Consider the case of Sherry Johnson of Florida who was married off at age 11, already a mom, and is now advocating for a minimum age for marriage to be set in the state.  A surprising number of states have no such law.  You can read about her case and her cause in a story by Nicholas Kristof in the NY Times. 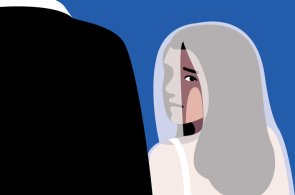 As a Christian of many years and a pastor to boot, what I find most disconcerting about the story is that many such cases point to religious factors (Conservative Christian, Ultra-orthodox Jewish) for these underage ties.  Allow me to add my $0.02 to the discussion and voice my support for Sherry’s cause.  Despite some initially uncomfortable verses in the Bible, which make good fodder for a skeptic’s objections to it, allow me to explain why I believe the believers in question are seriously misguided and the skeptics perhaps not-so-well informed.

28 “If a man meets a virgin who is not betrothed, and seizes her and lies with her, and they are found, 29 then the man who lay with her shall give to the father of the young woman fifty shekels of silver, and she shall be his wife, because he has violated her. He may not divorce her all his days.”

There are at least two issues behind a straightforward reading of these verses that can make or break our understanding.

As to nearby biblical content, the verses directly preceding these deal with rape.   Here they are.  To summarize, a man guilty of rape should be put to death.

25 “But if in the open country a man meets a young woman who is betrothed, and the man seizes her and lies with her, then only the man who lay with her shall die. 26 But you shall do nothing to the young woman; she has committed no offense punishable by death. For this case is like that of a man attacking and murdering his neighbor,27 because he met her in the open country, and though the betrothed young woman cried for help there was no one to rescue her.

These words deal with a man who forces a woman “who is betrothed.”  The case of a married woman would be even more serious.  Rapists don’t get off easy with Moses; rape, biblically speaking, is a capital crime.  If someone wants to believe that a (not-betrothed) girl can be forced to marry her rapist, we have to ask ourselves why the sudden shift.  More on that in in a minute.  Let’s pause, take a deep breath, and absorb the fact that the Torah says a rapist should die.

Question:  What does traditional Judaism say about forced marriage generally, and why?

The aptly named website Judaism 101 is helpful here.  I will quote the applicable sentence.  “In all cases, the Talmud specifies that a woman can be acquired [for marriage] only with her consent, and not without it. Kiddushin 2a-b” (my underline).

Let’s go ahead and quote the reference from the Talmud while we’re at it.  “Alternatively, were it taught ‘he acquires.’ I might have thought, even against her will, hence It is stated ‘A WOMAN IS ACQUIRED,’ implying only with her consent, but not without” (my underline).

The origin of this interpretation can be found on another helpful website entitled My Jewish Learning.  It goes back to the first-ever marriage proposal recorded in Scripture, that of Isaac, through his messenger, to Rebecca.  Again, allow me to quote.

“In the Jewish tradition, we take the marriage of Isaac and Rebecca as our paradigm. From this wedding come our customs of the veil, the blessing of the bride, and the halakhah (Jewish law) that a woman must be asked if she consents to the marriage” (my underline).

In the case of Rebecca and that initial, exemplary marriage proposal, In Genesis 24:57-60 (ESV), we read, “57 They said, “Let us call the young woman and ask her [literally, ‘and ask her mouth’]” 58 And they called Rebekah and said to her, “Will you go with this man?” She said, “I will go.” 59 So they sent away Rebekah their sister and her nurse, and Abraham’s servant and his men. 60 And they blessed Rebekah …”

The very Orthodox Chabad.org likewise states, “The woman has the last, albeit silent, word at the wedding service. It is the man’s role to pursue, woo, and propose to her, but she must give positive willing consent to the proposal in order for the marriage to be legal.”

In support of this we may also cite the medieval rabbi Rashi (1040-1105), who, in his commentary on Genesis 24:57, says, “AND ASK HER MOUTH — From this we may infer that a woman should not be given in marriage except with her own consent.”

Let’s pause again, take another deep breath, and absorb the fact that the traditional Jewish perspective based on Torah, Talmud and no less an authoritative commentator than the acclaimed Rashi, agree that the consent of the young woman is a prerequisite to marriage.  If we don’t allow these ancient voices to inform our discussion, what we say or believe may seem rather arbitrary.  It would be like saying that people living thousands of miles and thousands of years distant from us know what we meant better than those who know us best.  That is kind of silly, really.

Back to Deuteronomy, with a now restated question.

Question:  If rape is a capital crime, and ancient Jewish sources on marriage very reasonably require the young woman’s consent, how does the victimized girl marrying him who victimized her even fit into the picture?

This requires a bit of conjecture, but at least now we are better equipped to, shall we say, conject?

First, let’s imagine a traditional, ancient, agrarian society in which people all knew one another fairly well.  We are not talking here about megacities; more likely villages or small towns with surrounding fields.  One day, boy meets girl, but in reality they were acquainted already.  They do not hate one another, and may even be mutually attracted.  He does something to her, possibly akin to what we would describe as date-rape today.  Her dad finds out.

Moses or no Moses, Torah or no Torah, Talmud or no Talmud, he is irate.  Someone better call the elders of the village before he kills the boy himself.  At this point the girl is doubly traumatized.  First, there is the date-rape.  Now her father is ready to kill a boy she has never detested and may not detest even now.  She is angry with him to be sure, very angry, but not stone-him-in-the-public-square angry.  Her father may desire revenge for his damaged pride, but that would for her mean something like watching townspeople gather to gaze at the boy’s battered corpse.

What would it accomplish and what would become of her?  Starting over is hardly an option.  She lives in a small town.  Megacities re still thousands of years off.  She possibly know ten or twelves guys total that are prospective marriage partners and this one is not the worst.

If we reread the verses in Deuteronomy, they now look like less of an oddball requirement that simply injures the girl further.  They even seem like more of a solution which forces the boy to live up to his manhood before his family, friends and people of the village. Notice that almost every verb in the verses refers to the man:  “He did this, he must now do this, and may not do that.”  The girl is, in a sense, being protected.  The man raping her is a serious thing.  He is not allowed to believe he can think freely and easily about sexual relations as if they had no consequences.  She might not only give her consent, but feel a sense of satisfaction or relief that he was (pressured to be?) man enough to marry her.

Back to the sad story of Sherry Johnson.  Her cause is just and we don’t live in ancient, agrarian Israel.  Children have no business getting married.  The responsibilities are more than enough when we’re mature.  Rape is a serious crime.  And any religious group that thinks it is reasonable for a young girl to marry the rapist that got her pregnant needs to think twice and do some hermeneutical homework in the process.  It’s a dumb idea and can only be defended from the Bible by the most superficial kind of reasoning, bolstered by a superficial, though zealous, faith.  As Paul implies in Romans 10:2, zeal is good, but not without knowledge.