The late Grant Osborne, commenting on this verse, said,

In my opinion, this is the single greatest sentence ever written in the history of the human language, the deepest theological statement ever written.*

Here it is in its entirety,

And the Word became flesh and dwelt among us, and we have seen his glory, glory as of the only Son from the Father, full of grace and truth.

We live very far removed from stable in Bethlehem and the cross of Calvary.  From our standpoint, we look back on millennia of church history, some of which is exceedingly troubling to look back on, assuming we ever take the time.  But if we go back far enough, we see the truth of the incarnation, the moment when God the Son took upon himself the nature of humanity.  This makes all the difference.

He became one of us.  One result of that universe-changing event is that we never have the need, nor even the option, to hesitatingly raise our eyes to heaven, turn our thoughts toward God, and imagine that he does not know what it is like to live the life that we live.

His was only one life, but it was full enough of relatable experience.  He was born under the specter of illegitimacy in a cultural setting where that mattered a great deal.  It would seem by the time he entered public life that his adopted father Joseph was deceased.  This means he bore substantial responsibility for the family’s provision while he was still young.  Though he attracted a following in his ministry, those closest to him and those who mattered in religious circles tended to misunderstand or oppose him.  Eventually he was betrayed by a friend, arrested, tried and sentenced to death unjustly.

This didn’t have to happen.  Christ didn’t have to be born, or die, or take our sins upon himself at Calvary, or rise from the dead.  This was God coming down to meet us on our own level and living a life full of tedious, miserable human experience.  This life was made glorious simply because he lived it, and nothing he ever did could remain poor or miserable or insignificant.

And he did it for our sake.

No deeper theology need ever be written and no deeper encouragement need ever be offered than what we find here in John 1:14.  Let us never tire of it.  We have everything to gain from this reality and everything to lose if we fail to appreciate its wonder. 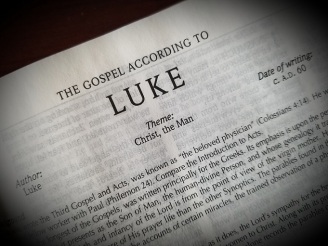 Now in Jerusalem, Jesus gives us some teaching on authority, theology and hypocrisy.  We will also check out the Nicene Creed.

We believe that Jesus Christ is truly God and truly human, both at the same time.

We also acknowledge that, as God, Jesus has all authority in heaven and on earth.

Please help us to be diligent students of your word so that we will believe rightly to the best of our ability.

We trust that right beliefs about you will lead to a better understanding of you.

Let this also lead to more complete obedience, better worship and a fuller appreciation for who you are and what you have done.

And prevent us from all forms of hypocrisy.

Beginning August 31.  Theology I – the first of three online courses in theology.

Check out the syllabus below.