26 And He has made from one blood every nation of men to dwell on all the face of the earth, and has determined their preappointed times and the boundaries of their dwellings, 27 so that they should seek the Lord, in the hope that they might grope for Him and find Him, though He is not far from each one of us. 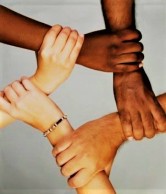 Paul was speaking in Athens to the philosophers on Mars Hill.  What he evidently knew back then was not particularly controversial to his Greek audience at the time.  For some reason this no longer seems obvious today, but turns out Paul was right.  This is one of the points we tried to emphasize in the recent series Unity, Diversity and Our Identity in Christ.

Check out this post appearing today from Peter G. Prontzos of Scientific American.