FYI: a fun little article on Darwin’s interaction with some people from the southern tip of South America.

(Image of Charles Darwin from Wikipedia.org 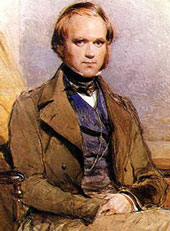 In his 1871 book Descent of Man, Charles Darwin cited the Fuegians as evidence to support of his two-fold thesis, that “man is descended from a hairy, tailed quadruped” and that “we are descended from barbarians”.

This was a considerable stimulus to racism in the 19th and 20th centuries. So who were the Fuegians, and why did Darwin regard them the way he did?

The Fuegians were the original four tribal groups who inhabited the islands which form the southernmost tip of South America, called Tierra del Fuego, meaning “land of fire”. It was named “land of smoke” by Ferdinand Magellan in 1520 for the hundreds of beach fires he observed, which the natives kept burning to keep themselves warm in the freezing climate and for cooking their staple diet of shellfish and seafish. This was later changed to the more exotic “land of fire”, reputedly by Charles I of Spain.  Charles Darwin came into contact with the Fuegians because of the missionary zeal of Captain Robert FitzRoy.